Riding the Russian Metro (Subway) or HELPLESS, NOT HOPELESS

I have been to Moscow, Russia over 20 times in the past several years. I have become very used to traveling on the Moscow Metro (subway) system. But there are always two fears I have while riding the Metro. 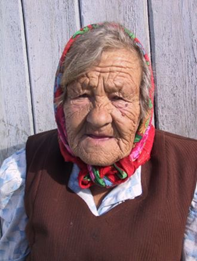 One fear is being attacked, let me explain.

There would be absolutely no room for anyone to get onto the train, but not to elderly Russian women. They are a threatening menace, shoving pushing, ordering people to move out of the way; when I saw them waiting on the train station I GOT OUT OF THEIR WAY, no matter how crowded the train was. The Metro system transports millions upon millions of people a day. To handle this number of passengers they have a very efficient system, and some lines have only a 30-second wait for the next train during the morning and evening rush hours. The trains get so crowded, one time I couldn’t find a space to rest my left foot on the floor of the train. I figured out the best location to stand was near the door of the train. From there I could see who was waiting to get on so I could become prepared for any pushing and shoving. It was when I saw an elderly Russian woman, like the one pictured above, that brought fear into my world.

My other fear was somehow getting lost and stranded while riding the train. I thought of the song made famous by the Kingston Trio, Charlie on the MTA. There is a lyric in the song about a man who could not get off the train in Boston:

Did he ever return?
No he never returned
And his fate is still unlearn’d
He may ride forever
‘neath the streets of Boston
He’s the man who never returned.

I have traveled the Metro well over a hundred times and never had a major problem until this trip. The system that worked for me was that I would count how many stations went by, and knew in three stations or six stations, or etc. I had to get off or change trains. I can also read Russian and verify it was the right station. But if anything changed from my regular routine, I knew I would have a problem.

One day I was sitting on the train and knew I had four more stations to go when I saw everyone get off the train. A Metro employee came on the train blowing a whistle telling me to leave the train. I thought that if I waited on the station another train would come and I would get on it, so I was waiting with one other person, everyone else had left the platform. I was relieved to see the next train pulling into the station, BUT everyone got off that train and went up the stairs leaving the platform empty again.

I knew I had to follow the crowd, but did not know where to go or what to do. No one spoke English at the station. Finally, I went to one of the Metro employees and said the name of the station I had to go to, Prospekt Mira. I was shown a map and he pointed on a map of the Metro System where I needed to go, and what to do after three stations on this new train. I went up the stairs to get the next train and felt somewhat relieved UNTIL there was an announcement and after two stations everyone was told to get off the train. I felt helpless not knowing what to do and thought “I would be the man who never returned.”

Finally, a man who spoke some English asked if he could help me. My answer, “YES!!!!!!!!!!!!!!” He went out of his way and adopted this helpless American and went on a train with me that would get me to Prospekt Mira – I thought maybe I won’t be the man who never returned. Then there was an announcement in Russian that the Prospekt Mira station was closed (which I never would have known as I don’t speak Russian). So my “hero “took me to another train and that train finally got me to the station I needed. 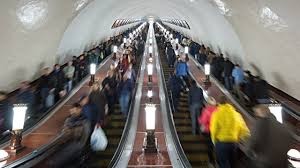 The Moscow Metro system is truly amazing. One of the things I most enjoyed when riding the Metro was the very long escalator ride from the entrance to the station, or from the station to the exit. I would look at the people going in the opposite direction, and focused on the elegance of so many Russian women.